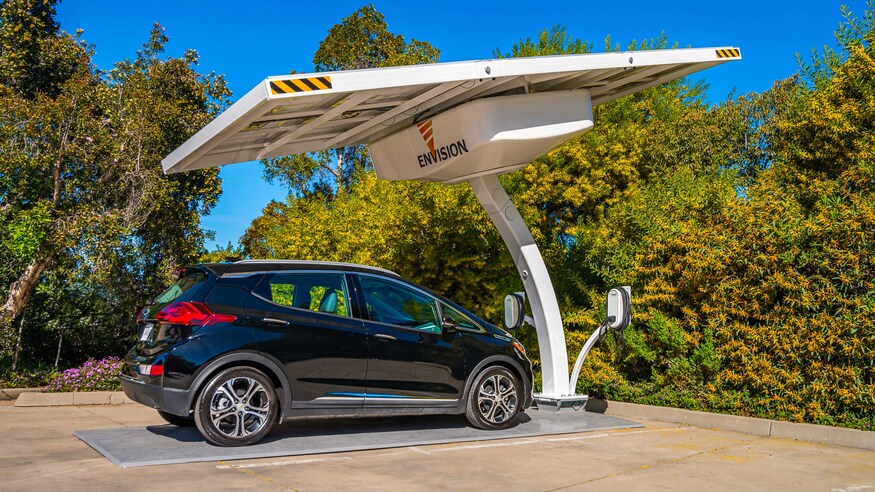 Challenge:
For this startup which makes an innovative solar-powered electric vehicle charger, they needed a familiarization campaign. Shortly after being listed on the NASDAQ, potential investors extolled the virtues of the products yet asked, “why haven’t we heard about you?” Deeply focused on product development and building revenue for the first years, Envision was new to any marketing process, so the CEO turned his attention to public relations to broaden awareness.  One of the core issues was being early to market. The average perception of EV charging was one step behind the clean EV tech they offered. As such, we built value and a marketing platform by explaining: EV’s don’t use oil but charging them does; one heck of an environmental irony.

Strategy:
Our three-pronged strategy included a b-to-b and b-to-c communication, as well as the development of new business. Throughout all the tactics employed, we leveraged Envision’s stellar client list, from Google to Dell, the U.S. Navy to New York City, Cadillac to GM, to convey credibility. To drive sales to their core customers in the government, fleet, and municipal sectors, we gained earned media placements in those industry trades.  To pressure those entities to purchase the infrastructure, we created publicity and programs that inspired consumers to demand that they too could drive their EV’s on sunshine. Our tactics included the development of an online “I Want to Drive on Sunshine” petition that could be used by the sales team to sway potential customers to purchase products demanded by their citizens. We created an on-unit QR-coded sign where EV drivers could snap a photo of themselves “making history” by filling their car on sunshine and sharing it with the like-minded on Facebook. Another business development effort included the creation of a social media rally cry where EV drivers could demand #FreeFuelForAll, found in EV groups on Facebook and LinkedIn. We also employed a byline and op-ed effort to provide original articles for the New York Times and the California League of Cities, a group of municipal decision makers, all potential customers for Envision. To cement credibility, we nominated Envision for awards that ranged from the Ernst & Young Entrepreneur of the Year Award to the United Nations Global Climate Actions Award. When the pandemic hit, we pivoted by encouraging the company to utilize its network of existing clients to offer moving their units to hospitals that needed to power parking lot overflow expansions.

During a 6-month period, Forbes wrote about Envision three times, and were featured in both Bloomberg and Reuters twice. Trade publications whose opinions sway Envision’s target verticals such as Renewable Energy Magazine reported more than six times. Green sector gurus not only reported but recommended Envision’s products to municipality consortiums in major markets, such as New York. Based on a story about how private corporations from McDonald’s to Kohl’s, Johnson & Johnson and Pfizer utilized their products to provide a free fuel amenity for their employees, WebMD and Reuters reported. The auto aficionado world embraced news of a solar-powered EV charger with stories in Car + Driver and Motor Trend.  The COVID-mobile power network concept resulted in the City of Oakland moving their unit to power COVID test centers, three TV reports, several regional newspapers, and another Reuters story. The CEO of the company was featured on the cover of Inventor’s Digest magazine in the Huffington Post’s, Thrive Global, on Medium.com and profiled in CEO World. In total, 86 earned media placements occurred in only 6 months, which amounted to a $2.2M advertising equivalency. The campaign reached 625M hyper-targeted potential customers and users with a whopping 5585% return on investment.