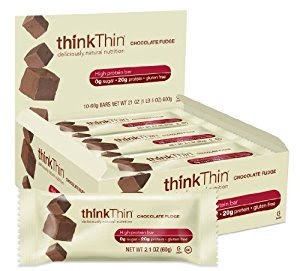 Challenge:
Be the first to proactively market thinkproducts (www.thinkproducts.com), an established 13 year old, $20 million a year company with retail presence in the country’s major grocery, drug and mass retailers. Connect the company’s heritage to a reason for customers to purchase the product. Position the company, its products and founder into a differentiated entity with an unmistakably memorable “face” to its target customer. Develop a continuity of look, verbal and written communication. Build a connection between the company’s products, each of which had radically different packaging with no relationship to the parent company, the product name or the inspiration for their creation.

Strategy:
Our first task was to identify the aspects of the company that differentiated it from the many other nutrition bar companies on the market. That factor turned out to be the founder’s background as a model whose experiences taught her that keeping a trim body and creating “inner beauty” emanated from “thinking about what she ate” and making good choices with “pure food.” As such, we developed verbal and written communications that told this story for the first time. We then recommended the three products be graphically branded to connect them to their heritage by hiring a design company to change the packaging to reflect the name and founder’s inspiration. We put the product into the hands of celebrities that ranged from Uma Thurman to Judd Nelson and sampled the product to VIPs at the Emmy’s and Grammy’s. We then developed a cause-marketing program for thinkproducts that supported the female owner orientation and connected customers to the “wellness” aspects of the products. This became a new product called thinkThinPink, a special edition bar to benefit the Susan G. Komen for the Cure for Mother’s Day and Breast Cancer Awareness Month. In an effort to connect the founder’s inspiration to the product and convey the “inner beauty food” concept, we developed the thinkVitality Fashion Show. Sponsored by Whole Foods and LA Models, the show featured the highest end eco fashion designers in the U.S. The event connected the concepts of food and fashion, inner and outer beauty and transformed the myth of natural and wellness equaling rough hemp and Birkenstocks to sexy recycled cashmere and Gucci. The sold out event produced at the Natural Products Expo attracted more than 1,500 people. Eco-designer Deborah Lindquist created a -gown fashioned of thinkproducts wrappers (shown left on CEO Lizanne Falsetto), to be displayed on the Reuters Board in New York’s Times Square.

Results:
Within the first 12 months, we generated a 7,000% return on investment (a renewal of our contract)…Built a celebrity sampling program which netted a list of more than 25 celebrities such as Cameron Diaz, Ben Kingsley, Donna Karan and Jack Osbourne and others….Sampled the product to VIP’s of the nation’s largest entertainment institutions, such as the Emmy’s and Grammy’s…. Instigated a new branding model that came to include a total new packaging, look, feel, verbiage and legend….The new branding was warmly embraced by all of thinkproducts retailers, which doubled sales in the first two months on the shelf.